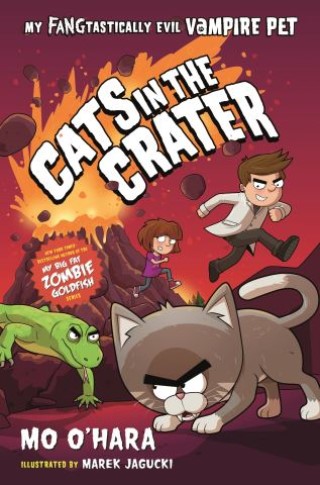 Cats in the Crater: My FANGtastically Evil Vampire Pet

Welcome back to Camp Mwhaaa-haa-ha-a-watha!

My epic summer at Evil Scientist Summer Camp hasn't gone quite like I planned, but THIS week I will DEFINITELY be Evil Emperor of the Camp. I've been stocking up on evil inventions and Fang's been sharpening her claws. We're ready for anything!

Okay, so maybe I wasn't really prepared to find out that Geeky Girl's grandmother is actually Madame Mako, inventor of the original volcano lair, and ruler of the most famous evil empire ever . . . but, this is going to be GREAT. Geeky Girl can inherit her grandmother's empire, and I'll come in as Head Partner, and help teach her the best way to be an evil ruler—with an epically evil crown!

Signed,
The Great and Powerful Mark

Mo O’Hara is the author of the My Big Fat Zombie Goldfish series. She grew up in Pennsylvania and now lives in London, where she works as a writer, actor, and storyteller, visiting theaters and schools all across the UK and Ireland. Mo and her brother once brought their own pet goldfish back from the brink of death (true fact).

Marek Jagucki, the illustrator of the My Big Fat Zombie Goldfish series, is a graduate of Falmouth School of Art and Design. He is a full-time illustrator and graphic designer based in Yorkshire, UK.